This is the first of a sequence of blog posts that summarize papers about over-parameterized ML models, which I’m writing to prepare for my candidacy exam. Check out this post to get an overview of the topic and a list of what I’m reading and some notation that I’ll often refer back to.

This week’s summary will cover “Two models of double descent for weak features” by Mikhail Belkin, Daniel Hsu (my advisor!), and Ji Xu (a recently graduated student of Daniel’s), which gives clean examples of when the double-descent phenomenon occurs for linear regression problems. For a high-level overview of double descent, check out the introductory post for this series, which gives a brief summary of the intuition for this phenomenon with some visuals. This paper was released concurrently with BLLT19, HMRT19, and MVSS19, which prove the occurrence of a similar phenomenon with slightly different setups. I’ll write about those two papers for the next two posts, which will cover the more subtle differences between the three papers.

Under certain circumstances, linear regression models with more parameters than samples (“over-parameterized models”) outperform models with fewer parameters. As discussed in the overview post, this flies in the face of classical statistical intuition, where the prevailing idea is that a model can only perform well on never-before-seen samples if the model is simple enough to not overfit the data. They demonstrate this phenomenon for two different regression problems, which they refer to as the Gaussian model and the Fourier model. We’ll focus on the former in this summary.

The contributions of their paper are roughly summarized by the following plot (taken from their Figure 1), which gives the “double-descent” curve that they prove in their setting.

In this example, they consider a setting where \(n = 40\) samples \((x_1, y_1), \dots (x_n, y_n) \in \mathbb{R}^{D} \times \mathbb{R}\) for \(D = 100\) are drawn. The least-squares linear regression algorithm is used to learn the best linear learning rule using only \(p\) out of \(D\) components of each sample. As \(p\) increases from 0 to \(n = 40\), the performance of the linear learning rule worsens as the model overfits to the data more dramatically. This corresponds to the “classical regime” of double-descent, albeit one whose “sweet spot” is at \(p = 0\) and hence never actually experiences the first of the two descents.

The strong performance is because of a peculiarity of the data models used by this paper. In more realistic settings, we’d expect that there should be a proper descent in the classical regime. The next section discusses why this model behaves like that.

The interesting behavior occurs when \(p > n\) and the expected risk (which is the mean squared error in this problem setting) of the learning rule improves as \(p\) continues to grow. Here, all of the training samples are able to be perfectly fit by the linear learning rule, and the addition of more features as \(p\) grows beyond \(n\) allows the learning rule to become less volatile and reap the benefits of over-parameterizaton without suffering from the consequences.

This all is very high-level—it’s not clear from the above description how “risk” is defined, how the samples are drawn, and how “volatility” can be quantified. The next section discusses the Gaussian setting in detail and proves that this phenomenon holds in that case.

Based on the definition of the Gaussian model, we describe three settings which we’ll return to later to illustrate how the results work and understand what their limitations are.

One of the strange parts of this setting—which we’ll observe when the theoretical results are applied to setting A—is that the “under-parameterized” classical regime never performs well because very little information is provided at all when \(p\) is small. This means that in the eye of the learner, the data is very noisy, because the learner knows nothing about the \(x_{T_c}^T \beta_{T_c} + \sigma \epsilon\) components of \(y\). (\(T_c = [D] \setminus T\) is the complement of \(T\).) As a result, it’s a little bit of an “unfair” setting, where no one can reasonably expect good performance when \(p \ll D\). As is the case with many results in this space, the double-descent phenomenon requires certain peculiarities of the learning models to be studied in order to be cleanly demonstrated.

Theorem 1 gives exactly the expected risk for the learning rule obtained by using least-squares linear regression on the Gaussian model:

To make this concrete, we compute the risk for each of the three example settings given above.

A notable weakness of Theorem 1 is that the results are about the expected squared loss, rather a high-probability guarantee about what the risk will actually be. Theorem 2 offers an improvement by giving concentration bounds on \(\|\beta - \hat{\beta}\|^2\). We won’t go into that in this blog post, but these kinds of bounds will be seen in other papers discussed in future posts.

The proof of Theorem 1 can be broken down into several manageable steps, which this section will summarize at a high level. This part will be somewhat more jargon-y than the rest of the blog post, so feel free to skim it if it’s not of interest.

Unlike other proofs we’ll see later on, this proof primarily relies on linear algebraic tricks related to orthogonality to exactly compute the expected value of various norms. There is no need for much in the way of probabilistic trickery, because this bound holds in expectation rather than with high probability.

Note: Because we’re dealing with Gaussian data, we don’t need to worry about issues related to the matrix \(X\) not being full-rank. The \(n\) samples will almost surely span a space of dimension \(n\) if \(n \leq p\) and \(p\) otherwise. If we were drawing samples from a discrete distribution (e.g. uniform from \(\{-1, 1\}^D\), then we’d need to consider the event where the samples are linearly dependent.

We only consider the interpolation case with \(p > n\) here, because the classical case has been well-understood for decades, and the authors refer readers to older works. Given the definition of the pseudoinverse, the difference between the two weight vectors can be decomposed into two terms: 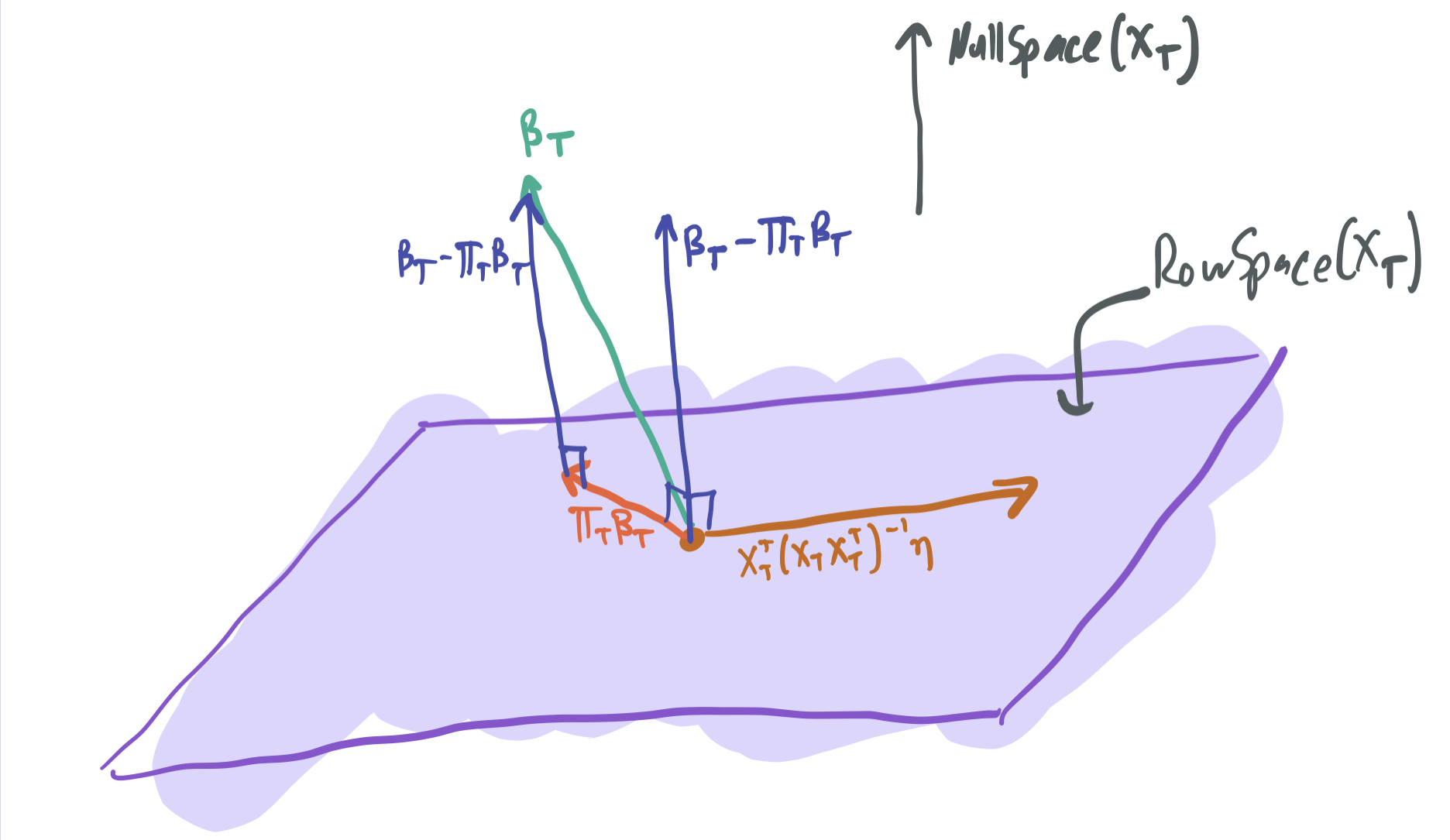 Therefore, the two terms are orthogonal, which means that the Pythagorean theorem can be used to break down the squared norm into two terms:

Plugging these pieces into the initial decomposition of the expected risk gives the theorem.

The second part of their results in Section 3 focus on a model where the samples \(x\) are rows of a Fourier transform matrix, which are orthogonal to one another. As before, the authors only give a \(p\) out of the \(D\) dimensions of each row to make the model under-specified. They’re similarly able to show a sharp difference between the classical and interpolation regimes, with a risk curve resembling the plot at the beginning of this post. Unlike the Gaussian case, these results hold in the limit, as \(n\), \(p\), and \(D\) all go to infinity, but the ratios \(\rho_n = \frac{n}{D}\) and \(\rho_p = \frac{p}{D}\) are kept fixed.

The key contribution of this paper was to show the existence of a simple setting where the least-squares linear regression algorithm exhibits double-descent and performs best when the number of model parameters is much larger \(p\) than the number samples \(n\). The simplicity of this paper’s setting leaves other questions open about how broad this phenomenon extends beyond these toy examples. The following questions about the generality of the results can be posed:

Thanks for reading this blog post! If you have any feedback, feel free to comment it below or email me! All feedback is appreciated. Stick around for more on over-parameterization and when it provably works.