This is the seventh of a sequence of blog posts that summarize papers about over-parameterized ML models, which I’m writing to prepare for my candidacy exam. Check out this post to get an overview of the topic and a list of what I’m reading.

Both papers consider a setting where there are \(n\) training samples \((x_i, y_i) \in \mathbb{R}^d \times \{-1,1\}\) drawn from some distribution that are fit by a neural network with \(k\) neurons. For the two-layer case (which we’ll focus on in this writeup), they consider neural networks of the form

How does this relate to the rest of this blog series? All of the other posts so far have been about cases where over-parameterized linear regression leads to favorable generalization performance. These generalization results occur due to the smoothness of the linear prediction rule. That is, if we have some prediction rule \(x \mapsto \beta^T x\) for \(x, \beta \in \mathbb{R}^d\) with \(d \gg n\), we might have good generalization if \(\|\beta\|_2\) is small, which is enabled when \(d\) is very large. The same observation holds up with neural networks (over-parameterized models leads to benign overfitting), but it’s harder to prove why it leads to a small generalization error. By understanding the smoothness of interpolating neural networks, it might make it easier to prove generalization bounds on the neural networks that perfectly fit the training data.

What does it have to do with robustness? Typically, robustness is discussed in the context of adversarial examples. If you’ve hung around the ML community, you’ve probably seen this issue featured in images like this:

Here, an image of a panda is provided that a trained image classification neural network clearly identifies as such. However, a small amount of noise can be added to the image that leads to the network being tricked into thinking that it’s a gibbon instead. Put roughly, it means that the network outputs \(f(x) = \text{"panda"}\) and \(f(x + \epsilon \tilde{x}) = \text{"gibbon"}\) for some \(x\) and \(\tilde{x}\), which means that the output of \(f\) changes greatly near \(x\). By mandating that \(f\) have a small Lipschitz constant, these kinds of fluctuations are impossible. This makes the network \(f\) robust. Thus, enforcing smoothness conditions is a way to ensure that a predictor is robust to these kinds of adversarial examples. 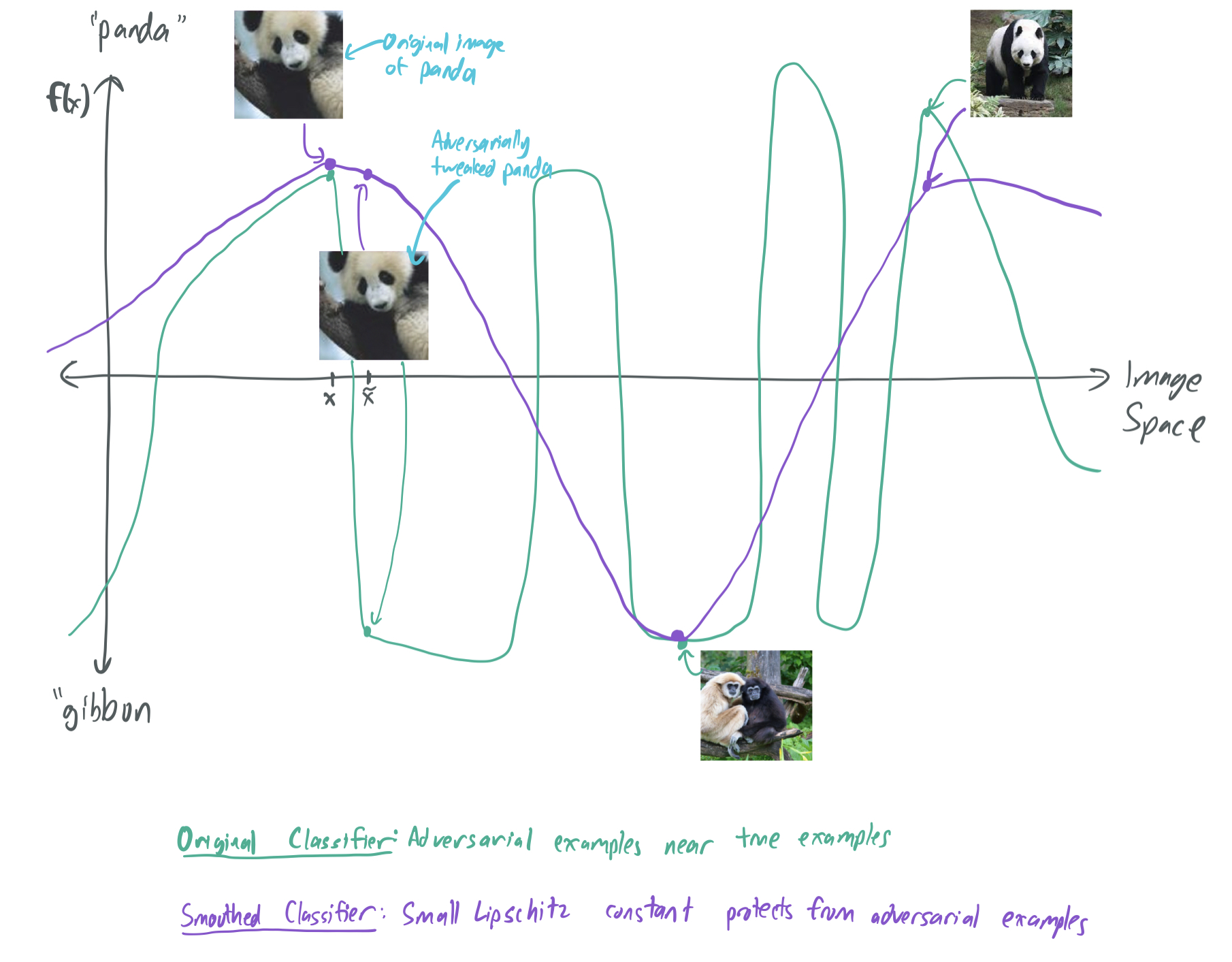 As a result, Bubeck and his collaborators want to characterize the availability of interpolating networks \(f\) that are also robust, with the hopes of understanding how over-parameterization can be used to avoid having adversarial examples.

One important caveat: Unlike the previous papers discussed in this series, this one focuses only on approximation and not optimization. It asks whether there exists an interpolating prediction rule that is smooth, but it does not ask whether this rule can be easily obtained from stochastic gradient descent.

For the rest of the post, I’ll discuss the conjecture made by BLN20, share the support for the conjecture that was provided by BLN20 and BS21, and discuss what remains to be studied in this space.

The conditions with constants \(c\) and \(C\) are necessary for the question to be well-posed.

BLN20 shows that the conjecture holds up empirically on toy data. For many values of \(n\) and \(k\), they train several neural networks to fit the \(n\) samples with 2-layer neural networks of width \(k\) and randomly sample gradients to find the one with the largest magnitude. When plotted, they note a nice linear relationship between the norms of the largest random gradient and \(\sqrt{n/k}\). Of course, the maximum random gradient is not the same as the Lipschitz constant, since it’s impossible to check the gradient for all values of \(x\) simultaneously, but this suggests that it’s likely that the conjecture is correct. 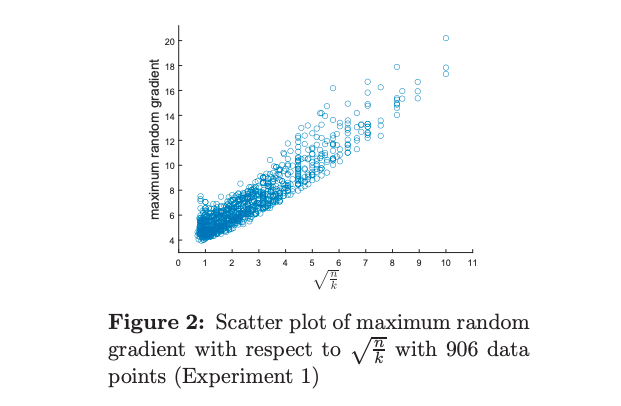 The BLN20 papers focuses on presenting the conjecture and giving a series of partial results that suggest it may be true. In this section, we give a brief summary of each of the partial solutions.

The following are all partial solutions to the upper bound. That is, they show weaker versions of the claim that there exists neural network \(f\) with Lipschitz constant \(O(\sqrt{n/ k})\) by showing either larger bounds on the Lipschitz constant or more restrictive parameter regimes.

The paper also gives a few constrained versions of the lower bound on the Lipschitz constant for any interpolating function. However, we omit them here because the second paper—BS21—has much better lower bounds.

By combining their Lemma 3.1 and Theorem 3, the following statement is true about 2-layer neural networks:

This is close to the conjecture up to logarithmic factors! In addition, this result is more general in the paper:

They also account for the fact that the bounds on parameter weights with \(W\) are necessary. Through their Theorem 4, they show the existence of a neural network with a small Lipschitz constant that approximates nearly all of the samples with only a single parameter. Thus, without these kinds of assumptions, the conjecture is rendered uninformative.

The proof works by considering some fixed \(L\)-Lipschitz function \(f\) and asking how likely it is that \(n\) random samples are almost perfectly fit by \(f\). By isoperimetry, this can be shown to happen with very low probability. Then, by making use of an \(\epsilon\)-net argument, one can show that no \(L\)-Lipschitz function \(f\) can perfectly fit the samples. 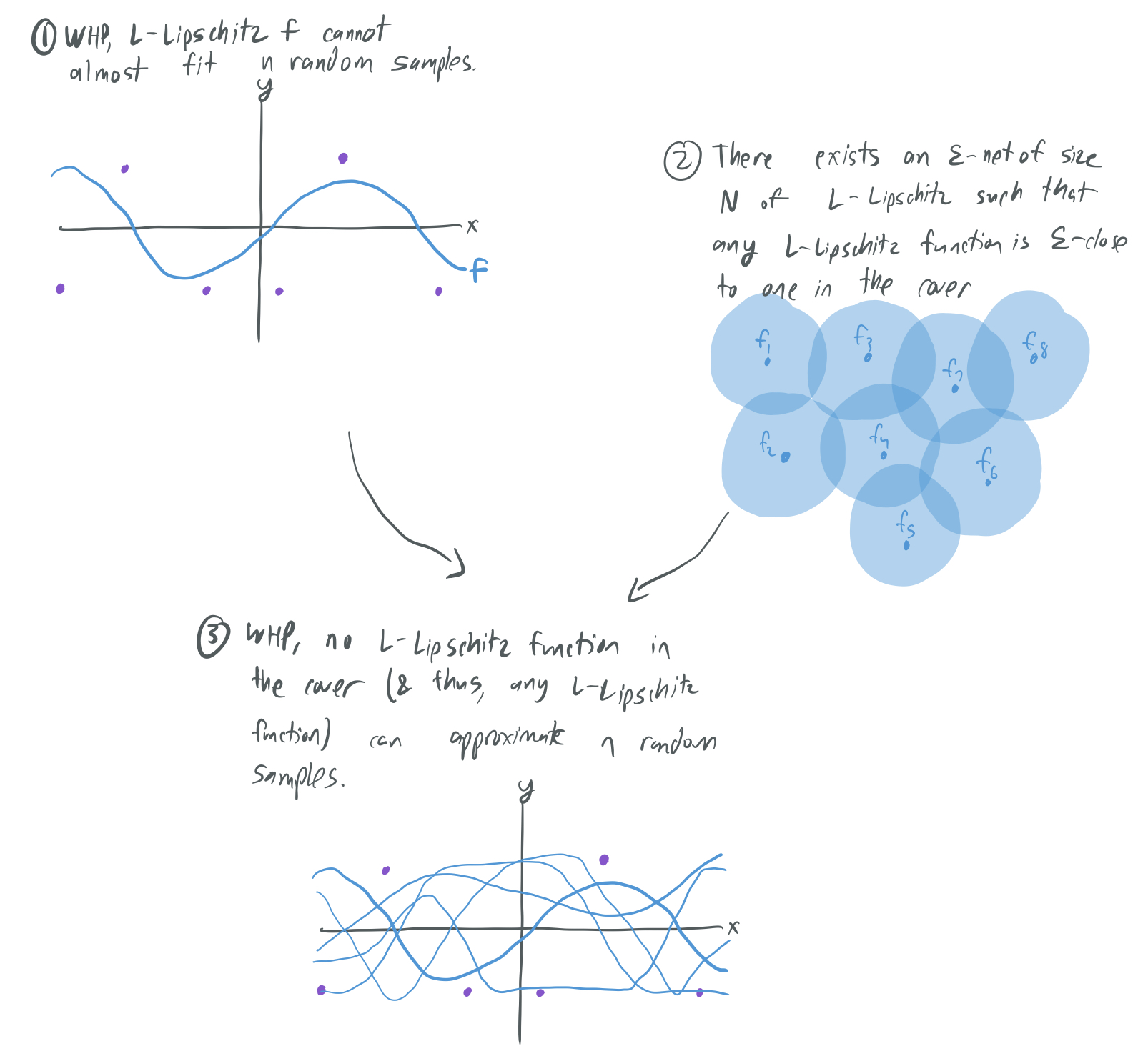 While I breezed over the argument here, it’s a relatively simple one that can be followed by most people with some background in concentration inequalities.

While the second paper resolves half of the open question from the first paper, the other half (the existence of a smooth interpolating neural network) remains open.

There are also a few caveats from the second paper that remain to be resolved. For one, it may be possible to loosen the restriction that there be non-zero label noise (i.e. \(\mathbb{E}[\mathrm{Var}[y \mid x]] > 0.1\)). In addition, the fact that \(\|x_i\|\) must always be bounded is a weakness, since it rules out Gaussian inputs; perhaps this could be improved.

Thanks for tuning in to this week’s blog post! See you next time!